Spam from Normsweb.com: If you have recieved spam or scam emails that appear to have come from me or my website, I have not sent these, my email server was compromised by a fuckwit scammer calling himself Daniel Lawson. Please report any cases of spam to me using the contact form. -Norm.

Do these mods and fixes at your own risk! I am not liable for any damage to you or your equipment from following anything listed on my website. Read the disclaimer.

My info will always be FREE. But if this helps you, please consider a donation to help keep the site going.

When it was first released it had 12 watt output and a list of problems such as mismatched microphone, misaligned sidebands and faulty de-modulator circuit etc. All of these problems are correctable, and in the later radios have been corrected at factory level prior to release. The later radios have 25 watt output as standard and some internal modifications. Hence early models are known as 12 watt and later models are known as 25 watt. However, the 12 watt version can be modified to produce 25 watt output. If you are unsure which version you have, you can do a simple test using a DC volt meter (see Microphone Wiring below). Later (25watt) radio's are now known as 497w where as early (12watt and some 25watt) radio's are 497s.

The Albrecht AE497 is a nice enough radio and it has good frequency coverage. After modification it will cover 25.160-29.699Mhz (minor VCO adjustment may be necessary, although I didn't need to re-tune the VCO in my own radio). Anybody who already uses a radio such as President Lincoln or other radio of that standard will probably frown upon this radio, but for anyone just getting into the world of multi-band communication or anyone that just wants a base-station radio could do a lot worse than to look at the Albrecht AE497.

My 497 radio (original 12watt version) gets quite hot in operation, which is apparently "normal" and the radio is supposed to get hot. Although since creating this web-page, I have discovered that not all 497's suffer this problem

Roy from USA (Dragon SS-497) writes: I'm very happy with my new rig. It blows smoke in such a big way that everyone is asking what did I do to my station?? This radio has got to be the loudest radio I've ever owned! I like it better than my Cobra 2000 by far!! I love this radio. I've had radios, but none like this. I like it better than the old Superstar 4900B and even yes, my old Galaxy 2527 believe it or not. It has a lot cleaner receive.

Since it's unlikely that all the bulbs have blown at the same time, it's probably the dimmer circuit that has failed. There are two ways to fix this problem:

Replace Q63 (2SA1505) on front PCB to get the dimmer working or
Bridge the negative pole of any bulb to ground to bypass the dimmer. 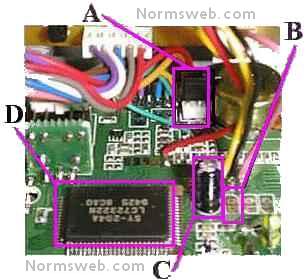 How to Switch Modes: Press FUNCTION, then press 2 (CALL) and hold this key pressed for about 3 seconds. Release button and the unit works on 454 Channels CB mode until the radio is switched off. Once you have switched to CB mode, You can toggle between channel number and frequency display by pressing FUNCTION then CALL, but this time only touch the call button momentarily. Pressing 2 (CALL) button without pressing FUNCTION will cycle bands, A B C D E F G H I J.

Use this chart to determine how you want your radio to operate (after doing frequency mod). Note: This table is specified for 25 Watt version. I have not checked whether it corresponds with 12 Watt version. Use at your own risk!

Roy from USA writes: I did the variable power mod, but, it gets the unit very hot! Especially when I turn it up to get through the hash and trash on the band. Mine is swinging up to 45 watts so, there's a lot of power going through it.

I remedied this, by installing a 12 volt box fan that I grabbed out of an old junker computer power supply. I removed the speaker from inside my unit and moved it over to one of the side vents on the top. I then, installed my fan right where the speaker went and it fit perfectly, imagine that! I also added a switch by removing the phone jack in front and installing a Spdt where I now had a new hole. I wired my hot wire to the on off switch to my unit after I checked the voltages of course, and the ground went to a solder point on the chassis by the board.

If you find that your radio looses it's memory settings if not used for a few days, give this upgrade a try. The modification is simple, But to get to the solder-joints to do the job you have to strip the front of the radio down, So only attempt it at your own risk. This mod should hold the memory's for about a month.

Make sure you know which version of the 497 you've got or you'll short out your radio.

Roy from USA writes: I did the variable power mod. For my variable, I removed the mic gain pot in front and got a double pot from an old echo board and wired it and the variable mod to that pot. Now, I didn't have to drill a hole anywhere and it still looked like new with no butchery to it.

No TX (nothing happens when you key the mic)

To check, connect a volt meter between ground and leg 3 of IC2, then key the mike. If you get a reading of around 5 volts this solution won't help you, sorry. If you get very small or no reading, try this:

Michael from Lanzarote writes: I made a mod to use an eletret condensor mic on the radio and it does sound better on AM and FM, but the SSB is still rough around the edges For the eletret mod use a 1.5V lithium battery, with series resisor of 2.2K feeding the +side of the mic and a 1uF cap in series with the audio out lead into the radio. I mounted it all in the standard mic.

Schematic and other Doc's

Here are some Albrecht documentation PDF's, including a schematic all in one handy RAR file. To decompress, just use winrar or winzip or whatever and enjoy!